Mohonk Mountain House in the Mid-Hudson Valley is one of the last great 19th century American resorts. It is exceptionally beautiful with lavish gardens and massive cliffs overlooking a pristine, spring-fed mountain lake. It lays sequestered at the northern end of the Shawangunk Ridge that rises between the Catskill Mountains and the Hudson River less than a hundred miles from New York City. The resort property, Mohonk Preserve and the adjoining Minnewaska State Park provide a contiguous protected natural area of about 20,000 acres constituting some of the loveliest countryside in the state of New York.

The conservation of this natural area can be attributed mainly to the foresight of Albert Smiley, a schoolmaster who envisioned a resort hotel amidst the splendor of nature. He initially purchased a tract of two hundred and eighty acres in 1869, about the same time that it became fashionable for the educated American classes to explore the pleasures of nature. For some, this was an escape from the filthy, crowded cities of the northeast during a time of rapid industrialization. Others were influenced by the great nature writers of the period and sought beauty for its own sake. Thoreau's Walden was published in 1854 while the naturalist John Burroughs who lived nearby, wrote the first of his numerous nature essays in 1871.

The property was purchased from a local farmer, John Stokes, who had built a small tavern at the end of the lake to supplement his farming income. He maintained order by chaining his drunken customers to a tree. While showing the property to the Smiley brothers, Mr. Stokes expressed his disdain for the 'pizen' laurel. He thought it was useless because the cattle would not eat it and it was impractical as firewood. Perhaps he did not notice the breathtaking display of delicately clustered pink and white flowers that draped the Shawangunks in early June or the sprawling grace of shrubs with glossy leaves that grew in and about the rocky places and under the hemlock trees. Recognizing that local farmers were more practical than aesthetically oriented, Albert Smiley slowly acquired neighboring farms until the estate had grown to over 5,000 acres. Much of this land makes up the Mohonk Preserve that was established to safeguard the fragile mountain ecosystem. Today, Mohonk Preserve serves as a superb model of large scale conservation through private initiative.

The Shawangunk Mountains were originally occupied by Delaware Indians who belonged to Munsee ('people of the stony country') tribes known collectively as the Esopus Indians. At first, they had welcomed trade with the Dutch and were not adverse to the establishment of a trading post in the area that is now called Kingston. However, about 1652, resentment mounted when immigrants began to settle in the valley. Like other native Americans, the Esopus Indians had no concept of property rights as defined by early European settlers and they had accepted baubles from the settlers in exchange for hunting and farming privileges. This led to violent encounters with the new settlers who felt that they had agreed to an outright 'purchase' of their land. The Esopus Indians were also at war with other tribes and the takeover of New Amsterdam by the English in 1664 brought floods of new immigrants to the region. Unlike the Dutch who had engaged in suspicious deals with the Esopus Indians, the English had no qualms about taking land without compensation. By 1676, with their numbers and their lands greatly reduced, they were conquered by the Iroquois who allowed them to sell about 40,000 acres to twelve Huguenot families in 1678 for a fair price. The Huguenots maintained a friendly relationship with them and consequently, these new settlers were never attacked by the Esopus Indians.

Louis XIV's ascension to the throne in 1661 brought great suffering to the French Protestants who were called Huguenots. Some fled to 'die Pfalz,' an area of refuge in the Palatinate in Germany. Their ordeal continued after the monarch pursued them and ravaged the region in 1664. It is understandable that many opted for the insecurity of emigrating to the New World. The twelve Huguenot families established the town that they called New Paltz in the fertile Wallkill River Valley between the Shawangunks and the Hudson Highlands that border the western bank of the Hudson River. Generally, Huguenots were educated professionals, artisans and farmers who sought independence through discipline and hard work. These traits ensured the success of their new communities. They grew flax, wheat, vegetables and fruit trees. Early settlers described streams laden with trout and great flocks of wild pigeons that darkened the sky but although game was abundant, they also raised cattle and sheep. At first, the Huguenots constructed wooden houses from the plentiful timber on their land. These were later replaced by sturdy, stone houses with steep roofs that were similar to the homes they had left behind in France. They have been converted to museums and can be seen on Huguenot Street that is described as one of the oldest streets in America. The Huguenot's earliest manufacturing facilities were a sawmill and a grist mill. Millstones made of Shawangunk conglomerate, a hard, white quartz rock, were quarried from the cliffs at Paltz Point. The construction of the Delaware & Hudson canal in 1826 and the New Paltz Turnpike in 1830 brought greater prosperity to this small farming community because they were able to sell flax, oats, rye, butter, beef, poultry and pork to the people of New York City.

Moggouck or Paltz Point as it was later renamed, is the highest cliff in the Shawangunks and marked the southwest corner of the land that was purchased from the Esopus Indians. It is located on the rockiest part of the mountain that was once 'left for the foxes.' Mr. Stokes thought that he had 300 acres for sale but the prior owner had transferred 20 acres to Major Isaac LeFevre in payment for his survey of the property and this parcel was subsequently purchased by Albert Smiley. 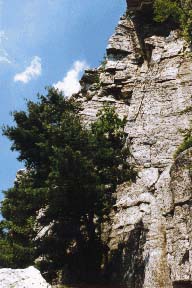 Skytop Tower stands on Paltz Point as a memorial to Albert Smiley. On a clear day, the views are expansive. The rounded contours of the well-wooded Catskill Mountains dominate the western horizon beyond the Rondout Valley. Depending on the season and the time of day, the changing colors of the Catskill Mountains have captured the imagination of writers, artists and nature lovers. To the Indians, they were 'The Wall of Manitou' while early Dutch colonists called them the Kaaterskills because they formed a protective barrier that sheltered the nearby valley communities. They form a massive watershed area and the water supply for New York City is collected in several Catskill reservoirs of which the Neversink, Rondout and Ashokan Reservoirs can be seen from the tower. A drive around these reservoirs is a tranquil retreat to the mesmerizing beauty of nature. There are hiking trails, too, and John Burroughs particularly enjoyed birding at Peekamoose Mountain. The Peekamoose Mountain Trail is located along County Route 42 between the Ashokan and the Rondout Reservoirs.

To the east, the Wallkill River passes by to join the silvered thread of the Hudson River. It is in the Wallkill Valley that the Huguenots established the first vineyards in America and made traditional French wines for their personal consumption. After much experimentation, commercial wineries were organized in the early 19th century and the area remains an important viticulture center as evidenced by the Shawangunk Wine Trail that winds for 60 miles from Warwick to New Paltz. Apple orchards, extensive vineyards, thoroughbred horse farms and small villages all share this scenic valley. 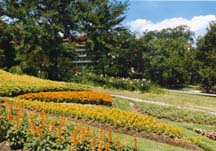 About 75 miles of hiking trails at the Mohonk complex (the preserve and the resort) eventually lead to Skytop Tower. They range from garden strolls and easy walks around the lake to the energetic Black Trail that climbs to Skytop Tower and the downright strenuous Labyrinth Trail that follows the base of the cliffs. Here, the underlying softer shale eroded causing the hard quartz to collapse in a jumble of giant boulders. The Labyrinth Trail passes over and under these boulders and culminates in the narrow crevice of the Lemon Squeeze that emerges onto Ephraim's Point, a precipitous table rock where Ephraim Decker bare handedly wrestled a deer by its horns. This is the part of the 'Gunks' that is a favorite among rock climbers who can be seen scaling the sheer cliff walls below Skytop Tower.

May to October are the best months for hiking. The mountain laurels are in full bloom in early June and the Fall colors are generally best the second week in October.

From the New York State Thruway, take Exit 18 and turn left onto Route 299 traveling west through New Paltz. After crossing the Wallkill River Bridge, take the first right turn for 0.25 mile bearing left onto Mountain Rest Road at the fork. The road winds up the mountain for about 4 miles to the Mohonk Gatehouse.

The Trapps Bridge entrance for day visitors to the Mohonk Preserve is reached by traveling west on Route 299 from New Paltz until it ends at Route 44/55. Take a right onto Route 44/55 to the Trapps Gateway Center on the right side.

Hikers should wear light colored clothing and long pants tucked into socks due to the increasing tick population in the Shawangunk Mountains. Hiking boots are preferable for rock scrambles and rough paths but sturdy walking shoes will suffice for most of the hiking trails. Bring a water bottle, camera and for day visitors, a picnic lunch.

To overnight at Mohonk Mountain House is an expensive but truly memorable experience that includes all meals and activities. Most weekends require a 2 night minimum stay. However, the facility is available to all budgets. The purchase of a meal allows entrance to the grounds, use of the house and valet parking service. Breakfast, lunch and dinner are served daily at a cost of $20-$40 per meal. A Day Visitor Pass is also issued for general admission to the Mohonk resort grounds and cost $7-10 per day per person or a family rate of $19-$26. Many less expensive accommodations are available in the surrounding areas.

The Mohonk Preserve is the largest private nature preserve in New York State. It is a non-profit organization that was founded to protect the fragile mountain ecosystem while providing opportunities for outdoor enthusiasts. Visit their website for information on programs that include hiking and bird watching, volunteer opportunities and rock climbing regulations.

Minnewaska State Park Preserve is located along the Shawangunk ridge and has been rated as one of the great places in the Western Hemisphere by the Nature Conservancy. Information about hiking, bird watching and other nature programs is available at their web site.

The New Paltz Chamber of Commerce is a helpful resource for visitors to the area. They provide travel information, a calendar of events, trail maps, hiking trails and biking routes.

The Ulster County Tourism and Public Information Office publishes an informative Travel Guide to Ulster County in print as well as online. Free brochures about specific places and activities are promoted in the print magazine. These include the Adirondack Trailways bus schedule, various hotels and resorts, the Shawangunk Wine Trail and Unique Accommodations in Ulster County.

is published by Smiley Brothers, Inc. and tells about the development of the Mohonk Resort. This booklet is available in the gift shop at Mohonk Mountain House. by Ralph LeFevre is mainly a genealogical guide to the Huguenot families of New Paltz but also presents a vivid history of the area. This 1903 publication is available in the genealogical section of many libraries or a reprint may be purchased from Hope Farm Press & Bookshop, 1708 Rt. 212, Saugerties, NY 12477, Tel: 914-679-6809. by Eugene Walter and photographs by Jonathan Wallen describe both the Mohonk Preserve and the Minnewaska State Park Preserve. by Christine Bird is a Moon Publication that is an excellent general guide to New York State and provides information about visiting Lake Mohonk. by Bruce Bolger and Gary Stoller has an interesting history about the establishment of the Minnewaska State Park Preserve that was saved from commercial development.